A big boost to the production of steel

In all international forums, we say with pride that India has vast reserves of iron ore and coal, and we further argue that the country has tremendous potential to grow its steel production. Also, infrastructure development is the prime agenda of the government which will give a big boost to the production of steel.

But what is the ground reality? Many iron ore mines in the country are closed because of the ban imposed by Supreme Court. This has seriously affected the iron ore availability and thus steel production. The problem is so grave that the country which has vast iron ore reserves has started importing this vital input. Same is the case in regard to coal. Coal block allocation has been reversed by the court and again many steel plants are running on imported coal.

Every politician talks about infrastructure development but in reality, most of the mega projects are on hold for want of clearances as well as finance. As a result it is hampering the production of steel which cannot grow owing to the non-availability of raw materials and the demand too is as good as stagnated. In the current scenario the industry is going through a very bad phase; especially in the last 2/3 years, everything seems to have come to a standstill. 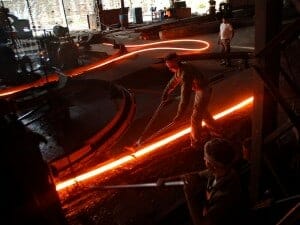 One more factor which is de-accelerating the industry growth is lack of metallurgical workforce. Around 2000 metallurgical engineers pass out every year, but many of them migrate to other industries (such as IT) for better prospects. e talk about figures like 150 MT and 200 MT but where is the manpower to manage this tonnage?

Even if we assume that if iron ore and coal are made available, and demand surges, then also it is impossible to achieve the production level simply because there are not enough metallurgists to run the plants.

All the industries follow a cyclic fortune pattern and steel is no exception.

I believe that we have come so much down that there is no room to go further. One can only hope to go up from this position.

I also see that there is a definite positive change in the industry sentiment since the last 2/3 months.

I only hope it translates into a fast movement of the economy wheel and finally into steel demand.

Copyright MSI Structural Services. 2023 - All Rights Reserved
Back To Top