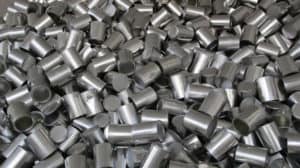 Aluminum is the most common metal in the world. It’s strong, lightweight, non-toxic and non-magnetic, making it useful in a wide range of applications across different industrial sectors. The metal is found only in chemical compounds with other elements like oxygen, sulphur and silicon. Pure aluminum doesn’t occur naturally and can only be economically produced from aluminum oxide ore. So, how is aluminum made?

Unlike metals like iron which are simply melted to separate the compounds, the aluminum production process is much more complex than that. The process can be broken down into different stages. Below, we’re going to discuss how to make aluminum in a step-by-step process.

There are different ores available in the world from which aluminum can be obtained, but the most useful for producing pure aluminum is called bauxite. Bauxite is primarily made of aluminum oxide, up to 50%, with a mixture of other minerals like iron and other metals and sand. While some bauxite ore deposits are mainly made of hard rock, most deposits consist of relatively soft dirt that’s dug from open-pit mines.

The usual color of bauxite when being mined is brick red, brown or flaming red because of the iron oxide. Approximately 90% of bauxite deposits in the world are found in tropical and subtropical regions, with about 73% of the world’s deposits found in Australia, Brazil, Guinea, India and Jamaica. Guinea leads with the largest supply of bauxites and the deposits there are of the highest quality with minimal amounts of admixtures. 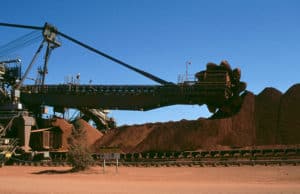 In the open-pit mines, special equipment is used to cut layers of the surface, with the rock or dirt containing the bauxite being transported to a processing plant. However, in some places like Russia’s Cheremkhovskaya-Deep mine in the Urals, one of the deepest mines in the world, the aluminum ore, bauxite has to be mined from deep underground mines that have to be built to reach the ore.

The next production stage is the processing of the mined bauxite into alumina or aluminum oxide, which is usually a whitish powder. The most widely used process for making alumina is known as the Bayer Process, which was first discovered over 100 years ago but still remains in wide use across the world, with around 90% of alumina refineries still using it. The process is generally very efficient but can only be used when dealing with high-quality bauxite.

To understand the alumina production, as part of understanding how to make aluminum, we’re going to go through the main steps involved:

While the recovered alumina usually has an unlimited shelf life, it has to be stored under the right conditions to avoid absorbing moisture. Most alumina manufacturers often ship it off to smelters immediately after production. Some producers also use a far less common method of production called sintering where the bauxite is sintered with soda and lime.

These two elements often bind the silica into insoluble silicates that can then be separated from the alumina easily. This process is, however, more energy-intensive that the Bayer process but is ideal for making alumina from bauxites that contain a high content of toxic silica admixtures.

The thick reddish-brown paste that is recovered from the alumina production process is often disposed of in specially designated and isolated areas which are designed to prevent any seepage of alkali into groundwater. When the disposal area is filled up, usually the area is covered with dirt, sand or ash and specific plants and trees planted. Such areas can be reclaimed after several years.

To create the right environment for aluminum production, another component known as cryolite is necessary. Considering that it’s a rare natural fluoride mineral, it’s manufactured artificially to be used in the aluminum production process called electrolysis. It’s made by mixing aluminum hydroxide, hydrofluoric acid and soda.

Having mined bauxite, made alumina from it and stockpiled cryolite, we’re now in the last stage of understanding how to make aluminum: electrolytic reduction. The reduction process is the heart of the aluminum production process. The reduction area is uniquely designed and consists of several rectangular buildings that can sometimes be as long as one kilometer. Inside these buildings, there are hundreds of reduction cells or pots that are usually arranged in rows and connected to power sources via massive cables.

A constant voltage of between 4 and 6 volts and amperage of 300,400 KA and more is sustained at the electrodes of each reduction cell. The electric current is the main production force behind the production of aluminum. The reduction process is largely automated. Aluminum is produced from the alumina in each of the reduction cells, via the electrolytic reduction process. The cells are filled up with molten cryolite to create a conducive environment at a temperature of 950 degrees Celsius.

The electric current flowing through the reduction cells break down the bond between the aluminum and oxygen, resulting in the aluminum settling at the bottom of the cells and forming a layer of 10-15 cm deep while the oxygen binds with the carbon to form carbon dioxide. A new portion of alumina is fed into the cells every thirty minutes, while aluminum is extracted from the cells two to four times a day using special vacuum buckets. When full, the buckets are then taken to the casthouse.

It’s important to note that for every one tonne of aluminum produced, about 280,000 cubic meters of gases are emitted. Each reduction cell is usually fitted with a gas removal system that redirects the gases to a gas treatment plant. Huge amounts of electric power are required in the aluminum reduction process. That’s why most companies producing aluminum rely on renewable energy sources that don’t pollute the environment.

Casthouse: Inside the Process: How to Make Aluminum 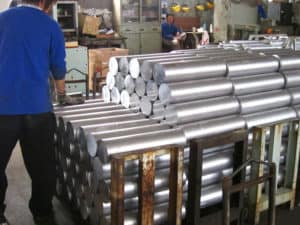 At this stage, the aluminum that is transported to the casthouse still contains compounds like silicon, iron, copper and others. Even the smallest amounts of admixtures can significantly impact the properties of aluminum. To remove these admixtures, the aluminum is remelted in a special furnace at 800 degrees Celsius in the casthouse. After this, the pure aluminum is them cast into special moulds that are allowed to solidify. Aluminum is given the required shape and chemical composition at the casthouse.

Aluminum ingots can weigh from 6 to 22.5kg on the lower end and up to 30-tonne slabs that can be up to 11.5 meters length. Customers can have aluminum delivered to them, after which they can add their own compounds and recast them in different shapes and sizes that suit their applications. Other processes like extrusion are also used to produce aluminum that is used to manufacture the majority of aluminum products in the market. 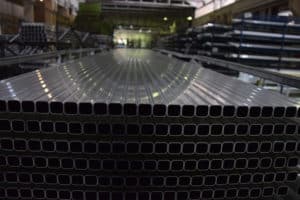 One of the best things about aluminum is that it retains its original properties even after processing, meaning that aluminum products can be easily recycled into new products. Aluminum scrap is actively collected all over the world, largely reducing the huge amount of energy needed to produce primary aluminum. Most of the aluminum being used both in the construction sector and even the consumer market such as the manufacturing of beverage cans today is as a result of recycling efforts.

Aluminum Supply: Inside the Process: How to Make Aluminum

MSI is a leading aluminum supplier based in Los Angeles and is dedicated to supplying high-quality aluminum.

We help you complete precision fabrication projects of every scale and are committed to being your long-term metal fabrication and supply partner.

Whether you need large-scale aluminum supply for a construction project or fabricated aluminum products for industrial applications, feel free to contact our sales team at MSI.